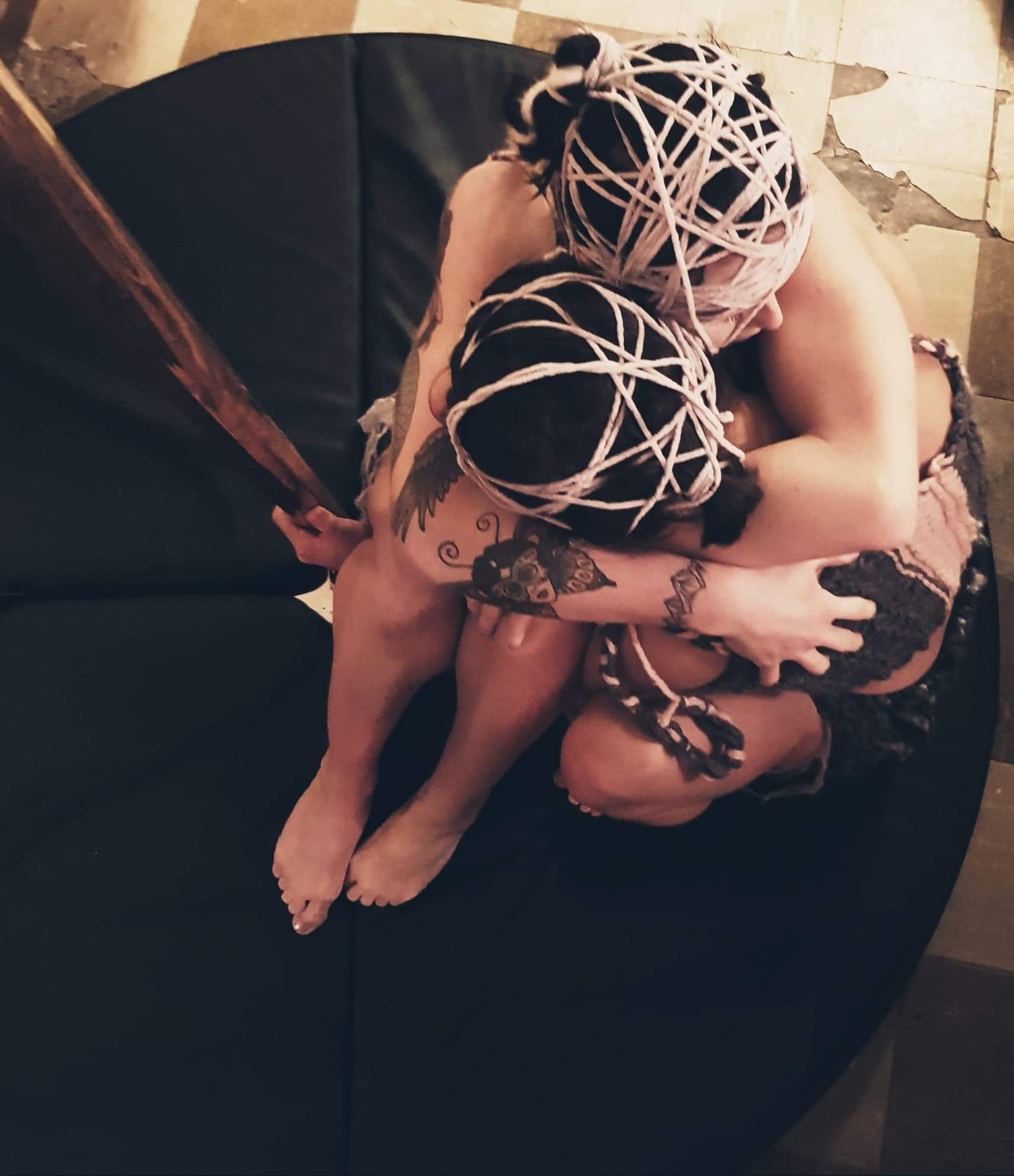 “A pole and contemporary dance performance and opportunity to ‘observe two creatures playing with two knitting needles and one pole’. The pre-performance atmosphere was very casual. Both performers, in knitted costume and cat’s cradle headwear, chat with audience members as they enter and arrange themselves around the intimate space. The pole is centre in the room, reaching towards an antique light fixture. The venue is a cafe/antiques shop squeezed in-between two terraced houses. Winderen invites us to talk, drink, feel free to leave or do whatever during what is to be an hour-long durational performance. Sound is tested, levels are set with the help of the cafe/shop owner (Winderen’s sister), and the performance begins.

There are other significant elements to the performance besides the dancers, knitting needles and pole. The knitting needles are entwined with an amorphous woollen entity, which at times functions like an old jumper, at others like a scarf, sufficient to extend warmth to several people. This may have crossed the minds of those standing outside in the rain, watching fixedly through the window unable to squeeze into the space. It doesn’t seem appropriate to call it a costume or a prop. It is a living, growing thing, attended to periodically in stretches of intently engaged knitting. Kasemi and Winderen seem almost duty-bound in their care for the sprawling garment, like the most natural thing in the world. It binds them together, sometimes literally, but also as an object of their attention, energies and negotiations through the space.

Billy Holiday is also an integral component to the performance. Her music providing a beautiful and haunting backdrop with layers of suffering, struggle, tenderness and longing. The crackle of the vinyl foregrounds its materiality. Pure vinyl static is used as an effective frame, evoking a sense of perpetual movement emphasising the cyclical nature of various conceptual and formal elements seemingly woven into the work: processes of reproductive labour; the shifts between states of rest and desire; the reciprocal emotional and physical work necessary to build and sustain relationships. The repetition in the act of knitting itself – small, careful, precise gestures through which something whole emerges, with a strength and shape of its own. And of course the physical rotation of the pole and the performers’ expert exploration of this form and space, traces of which echo throughout the choreography.

The choreography makes use of improvisation, and moves through various configurations from solo and double pole acrobatics (sometimes having to negotiate the constraints of woollen thread and other materials as all become entangled), to stillness and tender embraces, to playful ravelling and unravelling of wool. Kasemi and Winderen seem intimately attuned to one another’s touch and needs, each with a distinct character of movement and apparent role within this peculiar domesticity. The audience are offered to glimpse into this private world.

To turn to the pole – an unavoidable presence in the small intricate surrounding. The work presents a strong vision of pole as an art-form, robustly dispelling any lingering preconceptions. The woollen costumes invite a gaze far from sexualised objectification. Similarly, the proximity to the performers creates a balanced intimacy. It must be said that Kasemi and Winderen are conventionally dancer-esque in physique, but their strength and virtuosity is undeniably exhilarating without veering into spectacle. The work’s challenge to convention is well executed, but crucially, it does much more than just make this point. It is a delightfully understated work that is layered, tender and playful. Despite the initial invitation to feel free to drop in and out of the durational performance, it is unsurprising that almost no one moved an inch.”